You are here: Home / No Kids People From History / Mary Astell: A Life With No Children in the 1600s 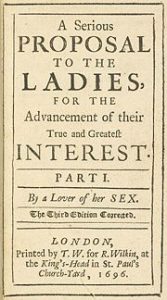 London, 1694. At age twenty-eight, Mary Astell held a distinct vision for the life well lived. In her Serious Proposal to the Ladies, Astell proposed that unmarried women seek their spiritual and intellectual improvement in dedicated institutions.

Astell, a transplant to London from Newcastle-upon-Tyne, hoped to persuade women to stop focusing on their physical beauty and turn inward, to transfer comeliness “from a corruptible Body to an immortal Mind.”

Astell focused on the perils of defining oneself through the quest for a man. Sin was on her mind. “Your Glass will not do you half so much service as a serious reflection with your own Minds,” she wrote. Astell urged women to develop capacities other than those that are attractive to men.  “We value them too much, and our selves to little, if we place any part of our worth in their Opinion; and do not think our selves capable of Nobler Things than the pitiful Conquest of some worthless heart.” Astell claimed for herself and her sex a higher standard of dignity.

Astell’s proposal offers a firm and ringing rebuttal to the notion that child-rearing is somehow orthogonal to virtue. For Astell, the ultimate aim is moral development in order to secure “the love and admiration of GOD and Angels” not “vain insignificant men.” Piety could not take root without intellectual consideration to the theology undergirding belief. Astell envisioned learning for the improvement of both the individual and the betterment of society: “Learning is therefore necessary to render [women] more agreeable and useful in company, and to furnish them with becoming entertainments when alone.” The ladies of the place would serve as an example for the rest of womankind, “that Women may no longer pass for those useless and impertinent Animals, which the ill conduct of too many has caused them to be mistaken for.”

Unlike her contemporaries, Mary Astell understood that women needed alternatives that would support them not just prior to marriage, but for the indefinite future.  Astell hoped to build these places for “religious retirement” where women could either stay at the house until they chose to marry, or remain for their entire lives. In this way, women could avoid a hasty marriage simply to avoid the moniker “old maid.” In Protestant England, however, Astell’s proposal smacked too much of a Catholic convent. Despite her protests that no vows would bind women to their retreats, nor would they remain cut off from the world, no patron could be persuaded to support her work. One interested donor of 10,000 pounds was convinced to retract the offer in order to avoid the stain of “popery.” Astell herself lived to the age of sixty-five, and never married.

Susan S. Lanser, “Singular Politics: The Rise of the British Nation and the Production of the Old Maid,” in Singlewomen in the European Past, 1250-1800, ed. by Judith M. Bennett and Amy M. Froide (Philadelphia: University of Pennsylvania Press, 1999): 297-323.

Rachel Chrastil, Ph.D., is Associate Dean, College of Arts and Sciences, Xavier University, and is writing a book currently entitled How to Be Childless: A Historical Companion for the Twenty-First Century.