You are here: Home / Famous No Kids People / Milton Hershey—Building a Legacy 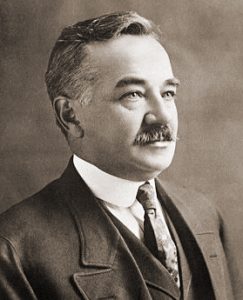 When Laura Carroll asked me to write a short piece about my favorite childless/childfree historical person, I immediately thought of Milton Hershey. You have undoubtedly enjoyed Hershey’s famous chocolate, but what you may not know about Milton Hershey is the legacy he built that went well beyond his yummy chocolate empire.

Milton Hershey was born in Pennsylvania in 1857 and founded the hugely successful Lancaster Caramel Company. In 1905, Hershey opened a chocolate factory, still the largest of the 21 Hershey Food plants in North America. Then he built a town, with a hospital, library, post office, general store, and he built a plant to recycle steam from the factory to heat private homes and bought trolleys to carry workers to the factory. When he and his wife realized they were likely to remain childless, he founded an industrial school for orphaned or low income boys in the region.

Thanks to his vision and his financial legacy, the town of Hershey, home to over 9,000 residents in south-central Pennsylvania, now boasts The Hershey Theatre, The Hotel Hershey, The Hershey Lodge and Convention Center, hosts to the folks who come to see the world famous Hershey Chocolate Factory and The Hershey amusement park (which was originally built as a perk for his factory workers).

The school, renamed Milton Hershey School, continues in the spirit of Milton Hershey, funded by the billion dollar trust that bears his name. Milton Hershey wanted a stable environment for the students (an environment he did not enjoy as a youngster), so he funded comfortable housing for students on well-tended grounds, staffed by caring house parents. Though initially the school offered an industrial education, Hershey wasn’t bent on funneling his students into factory work. He wanted them to chart their own destiny.

“Let them earn their own livings,” he was quoted in one authorized biography. “Some will want to be farmers, and they ought to be taught the best methods of farm management. But there will be others who want to be electricians, carpenters, typesetters or plumbers. We’ll give them a chance to learn all these things.”

Close to 70 years after his death, the Milton Hershey School thrives, serving close to 2,000 orphans and children from low income families, housed in over 90 homes in the small town. Girls were admitted starting in 1976, and now represent over half of the school population. The Hershey Fund pays for room and board, mental health and health services, and even college scholarships for the students. Alumni of the school often return as administrators and volunteers. Each has a story of how Milton, or his legacy of caring and education, has made a profound impact on their lives.

Though Milton and his wife “Kitty” were not childless by choice, they represent a growing demographic of childless and childfree persons who take active steps to share their gifts, money, and vision with the wider community. They are not rare, they are just two historical examples, and role models, for  the couples and singles who make the same commitment today.

Laura S. Scott is author of Two Is Enough: A Couple’s Guide to Living Childless by Choice, and is giving signed copies of it to this year’s winners of the Childfree Man & Woman of the Year.
Laura is also the Director of the Childless by Choice Project, and President and Founder of 180 Coaching, a Tampa, FL based company providing Leadership, Life, and Transition Coaching with a special interest in mindfulness and decision making.