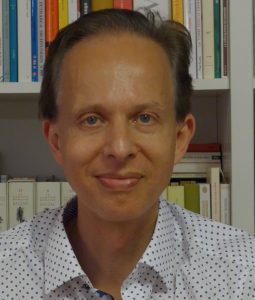 Learn more about the 2017 Childfree Man of the Year, Karim Akerma, and his work:

How did you come to be a philosopher, particularly in the area of the ethics of reproduction?

It dates back to when I was in secondary school. A teacher of mine was a Buddhist. Buddhism’s aim to diminish any suffering especially appealed to me. To my surprise, however, I met no Buddhist who did not want children as a way to prevent suffering.

I became an atheist, and wondered why society focuses so much on young babies, and not that they will experience suffering, and eventually become old and fragile. I also started wondering why embryos became the logo of modern ethics; in my opinion, old and fragile people should be the focus of ethics.

What do you see as the biggest kind of social pressure childfree people get to have children?

A lot of pressure comes in the form of making childfree people feel deficient and ungrateful.  A majority of people in society assume having children is every woman’s purpose, and that having children is natural. The childfree are made to feel deficient because they don’t – or are unable to – listen to this alleged whispering of nature. Women who don’t want children are seen as sealing themselves off from their natural destiny.

Pressures like these stem from many people not acknowledging and accepting that we are first and foremost cultural beings capable of free decisions.

What is the ultimate goal (s) of your work – what social change do you seek and why?

With my work I want to provide better information on what it really means to bring a human into existence. People should not simply have babies, but make educated decisions about whether to become parents. I want to encourage men and women everywhere to question religious and other social and cultural traditions, and make educated rather than ready-made decisions.

Today the main focus resides in the question of whether or not it’s good for the parents to ‘have’ a baby – as if babies were consumer goods. I want prospective parents to raise questions like these:

Would it be good for my child to have me as a parent?

Am I capable of guaranteeing my child a good future?

Is the world now and the foreseeable future good enough for my child?

I also want to raise awareness about the problems of expecting one’s children to be alive when the parents are ailing and die. Is it ethical to expect one’s own children to go through this difficult experience?

Lastly, I want social change regarding mindsets about ‘debts’ we have with our parents. The reigning belief is that because we owe our very existence to our parents, we are indebted to them. On closer examination, however, no yet-to-exist child requires itself to be created. And no yet-to-exist child would suffer from not being created. Parents do not improve their children’s situation when they bring them into the world. When looked at this way, children aren’t indebted to their parents. Quite the contrary — because parents are solely responsible for their children coming into existence, they are their children’s life-long debtors and need to provide them decent lives.

What do you think is necessary for the childfree choice to one day reach global acceptance?

To me, it is of paramount importance to spread the fact that none of us ever signed a ‘contract’ of the following kind: Because I exist, I’m obliged to have a child. Religions, societies and traditional families selfishly require people to believe and act on this notion. In order to reach wide acceptance, childfree people need to be willing to educate others on the myth of reproductive obligation.

They also need to talk about why choosing not to reproduce is the most ethical choice. Here’s why. Most people would agree that we should never do anything that will result in the death of another person. But when people procreate, they are doing just that. They are bringing a child into the world whose life will eventually result in death. Yet there is also powerful competing belief; that we all must/should have children. When people have children, they are making the act of procreating more important than the fact that this act will result in a person‘s death. Those who don’t reproduce do not make this choice. In this way, not procreating is the most ethical option.