You are here: Home / Famous No Kids People / Rita Levi-Montalcini: A 103-Year Legacy 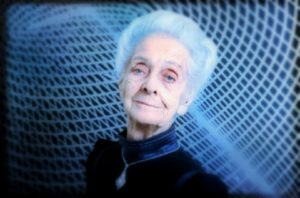 “But how will you leave a legacy if you don’t have children?” This is a question many childfree people hear time and time again. The truth is, there are many ways to leave a legacy that have nothing to do with having children. Read on to learn about a childfree woman who spent a century leaving her mark on the world.

No Desire to Live a Traditional Life

Rita Levi-Montalcini was born on April 22, 1909 in Turin, Italy. Her father was traditional and thought women should stay home to take care of children and tend the house. However, Rita had no desire to live the typical life of wife and mother; instead, she longed to go to college. As Rita retold:

At 20, I realized that I could not possibly adjust to a feminine role as conceived by my father and asked him permission to engage in a professional career. In eight months I filled my gaps in Latin, Greek, and mathematics, graduated from high school, and entered medical school in Turin.

Rita graduated from medical school in 1936 and then enrolled in a three-year specialization in neurology and psychiatry. However, her studies were soon interrupted by war and Benito Mussolini’s 1938 Manifesto of Race which barred Italian Jewish people from academic and professional careers.

Near the end of the war, Rita was hired as a medical doctor and assigned to a camp of war refugees. In 1945 when the war officially ended, she returned to Turin, Italy and her studies. Her return was short lived; in 1946 she was given a one-semester research fellowship in the laboratory of Professor Viktor Hamburger in Washington University in St. Louis. There she repeated her experiments on chicken embryos. The experiments turned out to be very successful, prompting Rita to postpone her return to Italy. Her one-semester fellowship turned into a 30-year career at Washington University where she held the position of Associate Professor and then Full Professor until her retirement in 1977.

In 1986, Rita Levi-Montalcini and Stanley Cohen won the Nobel Prize in Physiology or Medicine “for their discoveries of growth factors,” which “provided a deeper understanding of medical problems like deformities, senile dementia, delayed wound healing, and tumor diseases.”[i]

At the time, Rita became the third woman to be awarded the Nobel Prize in physiology and medicine. She used this status for the rest of her life to encourage women in science, promote scientific research, advocate for refugees and pursue international peace.[ii]

Rita’s recognitions for her contributions to science also included receiving the National Medal of Science, the highest American scientific honor, and being appointed a Senator for life by the Italian Prime Minister in 2001.

In 2002, at the age of 93 years old, she founded the European Brain Research Institute (EBRI), a non-profit international research institute fully devoted to studies in Neuroscience. Rita served as its first president until her death ten years later.

As a childfree woman, I find Rita fascinating. She received an array of very notable awards, worked in her chosen field right until the very end of her long life, and was also staunchly opposed to following the ‘prescribed role for women’. It is incredible to think that Rita so boldly went against societal pressure back in a time where no one was really doing that. This truly makes her a trailblazer in my eyes. These quotes demonstrate Rita consciously chose the independent, childfree life:

My experience in childhood and adolescence of the subordinate role played by the female in a society run entirely by men had convinced me that I was not cut out to be a wife.

Babies did not attract me, and I was altogether without the maternal sense so highly developed in small and adolescent girls.

I never had any hesitation or regrets in this sense… My life has been enriched by excellent human relations, work and interests. I have never felt lonely.[iii]

Thank you, Chelsey! She is the  founder of Childfree is Not a Dirty Word, and has served on the ICD Selection Panel.