You are here: Home / Famous No Kids People / The Person We Call the “Mother of Basketball” Was Never a Mother at All 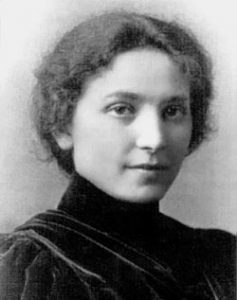 I will forgive you if you haven’t heard the name Senda Berenson Abbott. Senda was born under the name Senda Valvrojenski in 1868 in what was then called the Russian Empire. But you might know her as the “Mother of Women’s Basketball.”

Inducted into the Basketball Hall of Fame as a contributor on July 1st, 1985, Senda organized the first women’s basketball game at Smith College in 1893, using wastebaskets as goals. She was hired to teach gymnastics, a class that wasn’t near as popular as she had hoped it would be, so she decided to introduce team play, pitting the classes of young women against one another, with the student spectators sporting the colored armbands of their respective classes, and singing songs as encouragement for their team.

Basketball for women was considered scandalous at the time, especially for the well-bred women of Smith College, and no male spectators were even allowed. At the time, vigorous exercise was thought to be unhealthy for women but it was young Senda’s commitment to exercise that helped turn a very sickly and frail young Russian girl into the healthy and vibrant woman who would forever change the course of female athletics.

Senda became the author of Official Basket Ball Guide for Women, modifying the existing rules for men for the fairer sex. She did the same for volleyball and also introduced fencing and field hockey to the women at Smith College. She continued to edit her basketball rules guidebook throughout her life while she served 12 years as Chairperson of the Women’s Basketball Committee.

Senda remained a happy spinster until 1911, when she married Herbert Vaughn Abbott, a professor of English at Smith. Soon after her marriage, she resigned her position to serve as the Director of Physical Education at the Mary A. Burnham School in North Hampton, Massachusetts. In 1949, Hazel Walker became the first woman to own a professional basketball team, the Arkansas Travelers. In 1953, at the first International Basketball Federation World Championship for Women, Team USA wins the Gold.

A year later Senda passes away, at age 85, in Santa Barbara, California, her hoop dreams realized.