Today is the day the Childfree Man and Woman of the Year are announced!
Many thanks to all of the nominators for such great nominations!
Here are this year’s winners and their nomination submissions. 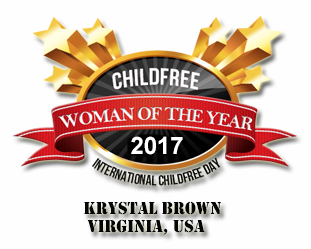 Krystal Brown* is from Norfolk, Virginia, and has known she did not want children since the age of sixteen. In her teens, she began writing letters to the editor on subjects of interest to the childfree, e.g., women in the workforce, the “most important job in the world” debate, women’s health and reproductive issues.

Krystal has several inherited conditions that she feels would be unethical to pass on to her children. One of those conditions is called hidradenitis suppurativa. It is a condition of the apocrine glands that causes large abscesses, pain, scarring and more. People with this condition have to deal with a lot of emotional and physical pain and problems. Krystal believes we don’t have the right to gamble with the quality of life of others, and that there are already too many people on the planet. She also knows that her preference for a quiet and harmonious home environment is not compatible with having children.

She is a blogger/author/singer/songwriter. Krystal runs the blog, “Freedom in Frugality,” and is the author of the e-book, Tales from the Gutter, which chronicles her life as a young black woman growing up in Chesapeake, Virginia.

Krystal has produced and sings on her first self-released album entitled, “Stripped,” which has songs and lyrics that deal with how childfreedom is not socially acceptable in many circles. The lyrics of the song “Stripped” speak to society’s tendency to degrade those who make different choices from what is socially acceptable. In the song, “Who Are You?” Krystal croons such lyrics as “you had children just because, that doesn’t make me less mature.” From toxic family members in the song, “Contempt” to feeling abandoned by God on “The Day that He Died,” each song in “Stripped” deals with deep issues related to childfreedom. Her album reflects her whole life in its unapologetic frankness.

Krystal also volunteers at the City of Norfolk Animal Care Center and the Foodbank of Southeastern Virginia.

Karim Akerma** is a philosopher, writer and blogger who lives in Germany. Having been acquainted with him for many years now, I can say he is one of those rare persons who always joins thought with action, and above all, desires to be faithful to his values. For many years, Karim has been working hard to raise the level of consciousness of humanity and make it think about the ethics of having children.

Karim deeply believes in the prevention of suffering for humans, non-humans and the environment. His beliefs in absolute non-violence and respect for non-humans led him to become vegetarian and, later on vegan. To connect with different cultures that share these values, he went to India several times to meet followers of Jainism, an Indian spiritual teaching committed to nonviolence toward all living creatures. His great attention to absolute non-violence is also why he decided not to have children. Karim adheres to a philosophy of non-procreation — one that believes the pleasures of life don’t compensate for all its sufferings, and that the best shield against the woes and violences of the world is not to be born.

Karim is the author of several books. In 1995, he published a book called, Soll eine Menschheit sein? (translated: Should Mankind Exist ?), which reflects his ecological concerns and develops the idea that the best solution to protect the environment is to reduce human population. In 2000, he published Verebben der Menschheit? (translated: Mankind’s Ebbing Away?). This year, Karim published an amazing book on the philosophy of non-procreation called, Antinatalismus – Ein Handbuch (translated: Antinatalism – A Manual). It’s one of the best books ever written on the subject and a masterpiece of intelligence and erudition. At more than 700 pages (!), it includes discussion and examination of childfreedom. It will remain a gold mine for future generations on the philosophy of non-procreation.

Karim runs a website and blog that discuss topics related to not having children, and has published several papers on these subjects. Also to serve the childfree cause, Karim writes songs (music and lyrics) that make opposition to natalist propaganda. On the whole, his works greatly help give childfree people the strength to remain so in spite of the social pressure to become parents at any price (e.g., children being victim of unfit parents or bad parenting).

In his personal life, out of his strong concern for reducing suffering in the world, Karim is a blood donor. Not wanting to bring children into the world does not affect his tender and loving feelings toward his family. He has spent a lot of time taking care of his mother, who has been struck by a difficult disease in her old age. In addition to being a dedicated friend, he is one of the kindest, most generous, honest, intelligent and cultured people I know.

Many thanks to the nominators, nominees and all who have been part of and celebrate International Childfree Day 2017, an annual, formal recognition of amazing childfree people and their lives!