You are here: Home / No Kids People From History / Viola Desmond, a Canadian Civil Rights Trailblazer 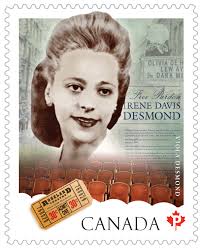 When I reflect on inspirational women without children, Viola Desmond is one of the first to come to mind. As a Canadian, I’m ashamed to admit that I didn’t know about this civil rights trailblazer until earlier this year. Her refusal to give into racial segregation happened almost a decade before Rosa Parks (another civil rights hero who had no children) made a similar stand.

Born on July 6, 1914 in Halifax, Nova Scotia, African Canadian Viola Desmond was raised in a large family with 10 siblings. Viola’s father was a barber. Following a similar path, Viola opened her own successful beauty school and launched a line of beauty products. By all accounts Viola was a successful and respected businesswoman. Her business, Vi’s Studio of Beauty Culture in Halifax, helped prepare young black women for employment as beauticians.

It Happened at the Roseland Theatre, New Glasgow

Viola’s story doesn’t have much to do with her successful career, however. Instead, it centres around what should have been a pleasant evening out. On November 8, 1946, Viola’s car broke down in New Glasgow. Knowing nothing could be done about it until the following day, Viola decided to take in a show at the Roseland Theatre, where she bought a ticket on the main floor. When she went to take her seat, the ticket taker challenged her, claiming she had a ticket for the balcony. Viola assumed a mistake had been made so she returned to the ticket seller, who told her, “I’m sorry but I’m not permitted to sell downstairs tickets to you people.” That’s when Viola realized that the theatre was discriminating against her based on the colour of her skin. She refused to accept this, and walked right back into the main floor of the theatre and took a seat.

Viola was then approached by the manager. When he couldn’t rouse her from her seat, he summoned a police officer who dragged her out of the theatre, injuring her knee and her hip, and took her to jail, where she remained for the night. The next morning Viola went to court where she was charged with evading a one-cent amusement tax (despite having paid for a main floor ticket). For this she was fined twenty-six dollars. She decided to fight the charge but ultimately lost. Her lawyer did not take the legal fees owed to him, and instead went to support the newly established Nova Scotia Association for the Advancement of Coloured People (NSAACP).

Sadly, Viola’s story didn’t have a happy ending. She and her husband divorced, she closed down her business and moved to New York. She died at just 50 years old from a gastrointestinal hemorrhage. In 2010, 63 years after the incident at Roseland Theatre, the province of Nova Scotia granted an official apology and free pardon to Viola Desmond.  At the time, Premier Darrell Dexter said:

“This is a historic day for the province of Nova Scotia and a chance for us to finally right the wrong done to Mrs. Desmond and her family. This is also an opportunity for us to acknowledge the incredibly brave actions of a woman who took a stand against racism and segregation.”

Viola has since appeared on a Canadian stamp, had a Halifax ferry and a Montreal street named after her, and in 2018 she became the first non-royal woman to be featured on a Canadian banknote (a ten-dollar bill).

To learn more about this courageous woman, and the details surrounding her life, visit: