You are here: Home / No Kids People From History / Louisa May Alcott: A Profile of Courage and Self Determination 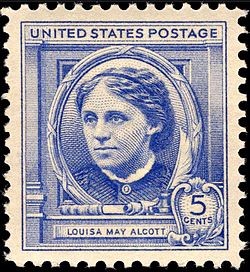 Author of Two is Enough: A Couple’s Guide to Living Childless by Choice

Like many of my peers growing up in the 60s and 70s, I was a big fan of Louisa May Alcott’s novel “Little Women.” Although it was written in 1868 (becoming an instant bestseller) these characters still resonated with me 100 years later.

Characters Meg, Beth and Amy were based on Louisa’s real sisters, and Jo was based on Louisa herself. Though I had yet to imagine a life without children (I was likely nine or 10 years old when I read this book), I particularly identified with the character Jo, who was a shameless tomboy and half-hearted bride, and likely would have remained a spinster in the book had the author not felt compelled by societal norms and expectations to marry her off.

Remaining unmarried and childless was no small feat in those days and required a good dose of self determination and courage. The Alcott family was poor, and Louisa reluctantly wrote this book to help her family financially. Her publisher wanted her to write a book for girls and she resisted at first but then acquiesced when her publisher sweetened the deal by offering a book contract for her father as well. Although he was a respected progressive thinker in his day her father did not have the same fame as his friend, Ralph Waldo Emerson. Alcott signed the deal and wrote the book in just 10 weeks.

Like Jo, I valued independence and aspired to be a teacher and writer but never a mother. Years before I read “Little Women” I would surround myself with my stuffed animals and teach this small menagerie of “students” with lesson plans I created from scratch. Raggedy Ann was the brainy one; donkey was a rather slow but enthusiastic student who asked all the dumb questions; piggy was the athlete with the short attention span who couldn’t wait for recess; and Bunny was the artist.

Alcott didn’t want to marry Jo off but as the book was published in two parts, the young women readers of Part One wrote to Alcott expressing their desire that Jo would marry the wealthy next-door neighbor Laurie (short for Theodore Laurence). Alcott refused to pursue that story line and instead married Jo off the more reserved (my take: BORING) Professor Bhaer. In her journal she wrote: “Girls write to ask who the little women marry, as if that was the only aim and end of a woman’s life. I won’t marry Jo to Laurie to please anyone.” Instead she marries Laurie off to her sister Amy.

The only upside I could see of Jo and the professor’s partnership was the founding of their idealized Plumfield School, (documented in Alcott’s book, Jo’s Boys) which was owned by Jo following her inheritance of the estate of an aunt and allowed Jo to continue her teaching and school administration while she raised her two boys.

Unlike Jo, Alcott never married, though she had opportunities and carried on an affair with a Polish man in Paris, thought to be the inspiration for the character Laurie. She remained a proud childfree spinster, though Alcott did take in her namesake niece “Lulu” after her sister May died due to complications from childbirth and cared for this niece until her death at fifty-five. Outside of best-selling author, she was a very vocal feminist and abolitionist sharing in an interview that “I am more than half-persuaded that I am a man soul put by some freak of nature into a woman’s body.”

I think that Alcott knew that had she married and had children she would not be fully herself and in control of her own destiny and I believe she was correct in that assumption given the time in which she lived. In the past 150 years, women inspired by her story and the stories of other courageous women who have taken this “spinster” path less traveled, now report higher levels of happiness than do their married and childed peers. Articles about this research published in Paul Dolan’s new book Happy Ever After have been making the rounds on many childfree sites recently including the Two Is Enough FB page and have prompted comments that show that Louisa May Alcott had the right idea. A life without marriage or children is gaining traction globally as we continue to challenge the assumption that marriage and children equals happiness for all.