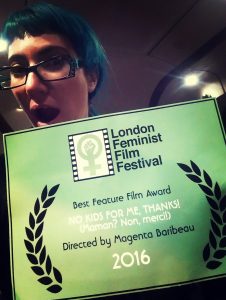 Canadian Filmmaker Magenta Baribeau, and the 2014 Childfree Woman of the Year, has won the 2016 Best Feature Film Award for her film, Maman? Non merci! (roughly translated as Being a mom? No thanks!) at the London Feminist Film Festival!

Check out the film trailer Here