You are here: Home / 2022 / Betty White – A Lifetime of Creative Expression and Caring 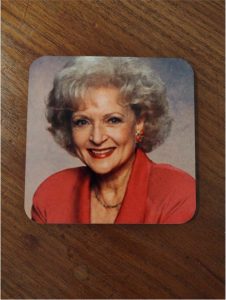 When Betty White passed away on December 31, 2021 at age 99, I went into a deep mourning. I had never met Betty White but at some semi-conscious level I had adopted her as a role model growing up, likely while watching the Mary Tyler Moore and the Golden Girls television series and the Hollywood Squares game show.

I was an adolescent at the time and had yet articulated my desire to remain childfree. Nor did I have any inkling that Betty would remain childfree over her life, as well. I just knew I loved this woman. I loved her spunk, her comic timing, her strong, yet feminine, presence. I was spellbound.

I didn’t realize until I was doing the research for my book, Two is Enough: A Couple’s Guide to Living Childless by Choice, that she was childfree, too. Like many of the people I had interviewed for my book it seemed that Betty had chosen to direct her innate compassion and caring for the benefit of animals. The dues for her fan club called “Bet’s Pets” went directly to her animal charities, primarily animal rescue charities and the LA zoo.

As I moved into my fifties, Betty’s long and acclaimed show biz career showed me that I could be relevant and even “hip” well after “retirement age” with her work on SNL, Boston Legal, and on Superbowl commercials. She worked tirelessly as an actor and a philanthropist up until she passed away and was once quoted as saying, “I have to stay in show business to pay for my animal work!”

Betty also affirmed my faith that “Two (really) is Enough” after being very vocally “militantly single” she succumbed to Allen Lund’s frequent proposals and remained happily married until Lund’s death due to cancer and did not remarry, devoted to the memory of her late husband Allen, understanding that their partnership was special and unique, and some would say, unconventional. I really don’t think Betty White gave a hoot what other people thought, and that is why I think I admired her so much.

Even though she led an unconventional life for a woman of her generation, unrestrained by the opinions of others, she did feel the need to be kind and generous with people. When a reporter asked her why she thought she was so “beloved” in the business, she replied, “I just make it my business to get along with people so I can have fun. It’s that simple.”

I miss Betty White and I wish there were more people like her. I aspire to be like her someday, too. Which is why a month after she passed away, I found this coaster with her picture on it at a gift shop and brought it home as a reminder to follow her example. I don’t own a pet. I don’t donate millions to charity, but I do hope that one day I will be remembered as fondly as she is!