You are here: Home / No Kids People From History / No Kids in Pre-Revolutionary France: Louise Le Mace 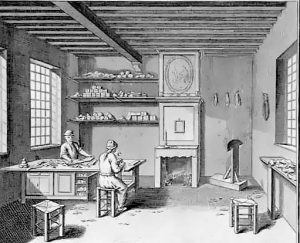 I find inspiration in both famous childfree people and the less-sung individuals who created meaningful lives for themselves without children. We sometimes find them in unexpected times and places. One such person is an ordinary woman from pre-revolutionary France who had no children – a skilled tailor named Louise Le Mace.

Le Mace lived and worked in Quimper, a town in Brittany on the furthest outstretched arm of northwestern France, during the mid-1700s. [1] Le Mace was a tailor, a member of the guild in her own right, with the training and accomplishments that earned her the title.

According to historian Nancy Locklin, Le Mace could have worked for someone else or settled for the less-skilled “seamstress” (such as the ones pictured above). Instead, she completed a formal apprenticeship and fulfilled the requirements of her trade, and in later years, she took on apprentices of her own.

From at least 1734, when Le Mace’s parents legally authorized her control over some of their property, through at least 1763, the final time that she figured on the tax rolls, Le Mace was always listed as a mistress tailor. And she was never listed with a husband or a child. Like many women of her time and place—ten to twenty percent of women in northwestern Europe—Le Mace, it seems, had no children.

Le Mace earned her place in the guild not because of a husband or father but because of her skills, training, and professional success. She could pay her guild dues and was entrusted by others with training their children. She developed an identity distinct from her parents, even though she lived in their household.

Her father, a shoemaker, kept a different trade. Le Mace paid heftier taxes as a mistress tailor than she would have if she had accepted a tax declaration as a daughter with no declared occupation. While we don’t have access to her own words or ideas about her life, we can glean a strong sense of a professional identity honored by her town and guild.

To be sure, Le Mace lived in a place that offered women the chance to join the tailor’s guild on the same basis as men, an unusual situation. And in Brittany, the long-standing tradition of partible inheritance (rather than primogeniture – which is the right of succession belonging to the firstborn child) meant that women were accustomed to inheriting property from their parents and heading households; the fact that Le Mace was listed as the head of household after her parents’ deaths was not unusual in a province in which 1 in 4 households in villages and towns large and small were headed by women.

As it turns out, such “unusual” situations are more common than we might think. Historians of France are continually locating women who defy the notion of women’s work as piecemeal, impermanent, ancillary and dependent.[2] By the 1660s, the French government, too, recognized the importance of women’s work, and taxed them accordingly.[3]

The recent collection, Women and Work in Eighteenth-Century France, tells the story of Louise Le Mace and other working single women with thriving professional lives. While it is true that many wives worked alongside their husbands, and that women faced discrimination of all kinds in public and private life, many women worked independently in a wide variety of professions as “tax collectors, managers, shopkeepers, food sellers, innkeepers, landladies, small-goods vendors, teachers, decorators, dancing mistresses, actresses, scholars, translators, billiard hall proprietors—the list could go on for lines.”[4]

These exceptions, in other words, are becoming so common that we need to start seeing them as part of the structure of the economy and of the story of women’s lives in centuries past. And so the lives of women in the past who had no children—which were much more common than we might think—also contained the possibility of developing valuable skills and a worthy vocation.

Dr. Rachel Chrastil is Associate Professor of History at Xavier University. This post is part of her book, How to be Childless: A History and Philosophy of Life Without Children.