You are here: Home / Famous No Kids People / A Doffed Hat to Dame Helen Mirren, Actress 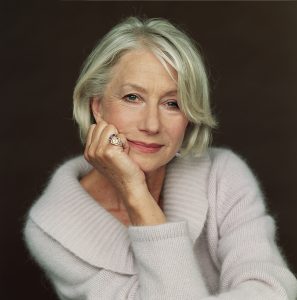 When I was writing Two is Enough—my book on childfree couples­—I wrote to Dame Helen Mirren, asking if she would consider writing a short foreword for my book. Soon after I received a letter from her personal assistant, saying that Dame Helen would not be able to write the foreword, as she was currently fully committed, acting in stage production in London, but she added that Helen wanted to wish me the very best.

I’ve always been a big fan of Dame Helen Mirren, not just because she is proudly and unashamedly childfree but because she is an amazingly gifted actress who exudes class even while peppering her language with the occasional F bomb.

When being interviewed for British Vogue in 2013, Dame Helen alluded to some of comments she had received in reaction to her childlessness, and how her status never much bothered her as much as it bothered others. “It was not my destiny, I kept thinking it would be, waiting for it to happen, but it never did, and I didn’t care what people thought… It was only boring old men [who would ask me]. And whenever they went, ‘What? No children? Well, you’d better get on with it, old girl.’ I’d say, ‘No! F*** off!”

And, as I documented in Two is Enough, “When award-winning actress Dame Helen Mirren was interviewed on 60 Minutes, correspondent Morley Safer asked, ‘Do you regret that you’ve never had children?’ Mirren responded, ‘No, absolutely not. Absolutely not. I am so happy that I didn’t have children . . . because I’ve had freedom.’”

Freedom to bounce between homes in England, France, and the United States; freedom to enjoy and nourish her two loves—her work in film and theater and her extended family, comprising a husband, stepsons, a sister, nephews, and longtime friends.

In her book, In the Frame, she writes, ‘I am often asked where I consider to be home, and I really have no answer for that. . . . My home is wherever this motley clan . . . collect, and become as one.’”

Dame Helen Mirren exemplifies the typical “stick to your guns” resolve that is necessary to navigate a childfree life, and to find happiness and peace. Her willingness to look beyond blood, marriage, and biology to build her tribe, her “motley clan”, has served her well. Her ability to inhabit so many diverse roles on screen and in live theater is in part because she resists being pigeonholed and stereotyped. Whatever role she decides to adopt, we believe her, whether it’s a seductress, an assassin, or the Queen of England. And when she says she’s perfectly happy that she ended up a childfree woman, I believe her too.

Cheers, Dame Helen Mirren! You make us proud to be in your company!

Laura is the author of Two is Enough: A Couple’s Guide to Living Childless by Choice